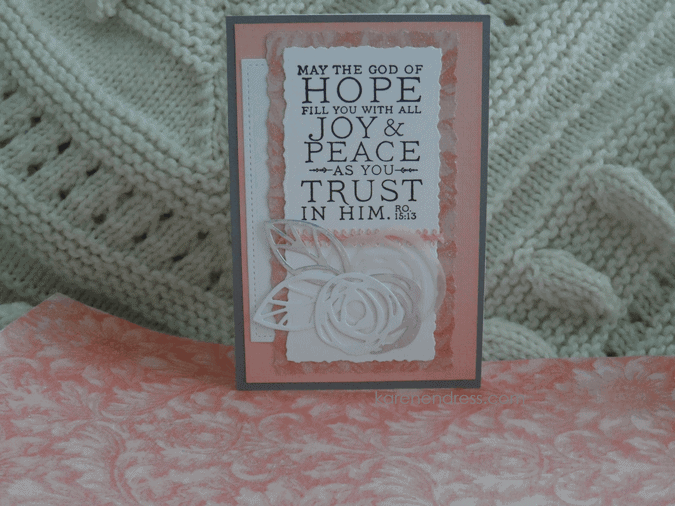 Hello crafty friends!  I finally had time to post this encouragement card I made a while ago.  When my new crafty friend 🙂 came over to make cards with me, she chose this one to duplicate.  I liked it so much myself that I ended up making another almost just like it.

The cardbase was (you guessed it!) Neenah Solar White 80 lb., covered with a nice gray followed by a slightly smaller panel of a light salmon, both linen textured from my stash of DCWV mat stacks.  I continued layering with a panel of cheap white stock cut with one of the Lawn Fawn Stitched Rectangles and a panel of patterned glitter paper (My Mind’s Eye Home Glitter Book) cut with a long deckled rectangle from this Spellbinders set. 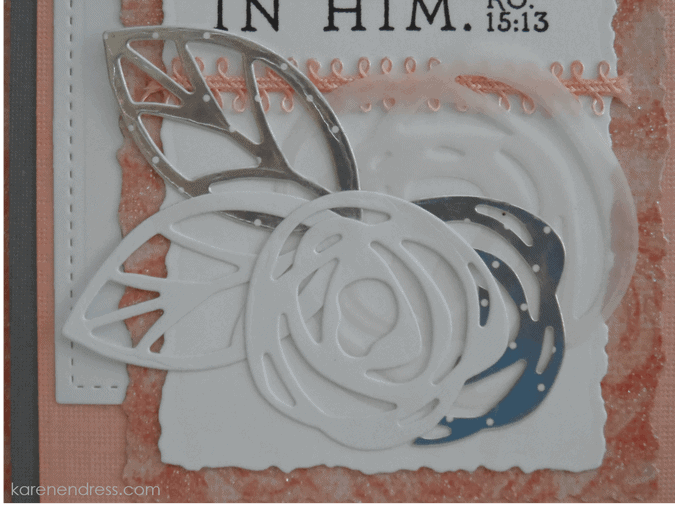 The sentiment verse is from Impression Obsession stamped with VersaFine Onyx Black on Neenah Solar White cut with the same Spellbinders die set. I added trim from the Celebrate It Aria “Vintage Blush” assorted trim roll (Michaels) about 2/3 of the way down the sentiment panel and cut an assortment of leaves & blooms with the Essentials by Ellen Bold Blossom dies from white, vellum & a dotted silver foil paper (CraftSmith Silver Gift). Both the trim & die cuts were adhered with matte medium using the Fineline precision applicator bottle for all of those intricate areas. 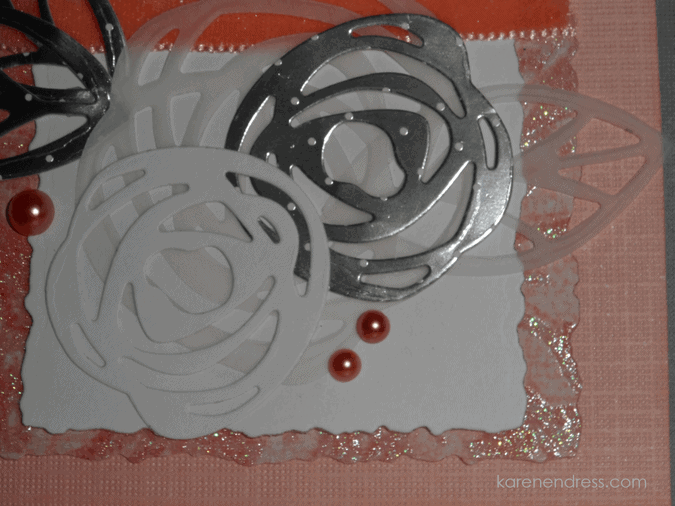 As you can see from the photos, I used all the same elements but a different arrangement of the leaves & blossoms and a different trim from the same Celebrate It Aria pack.  I also found a match in some flat back adhesive pearls from my stash. Serendipity! 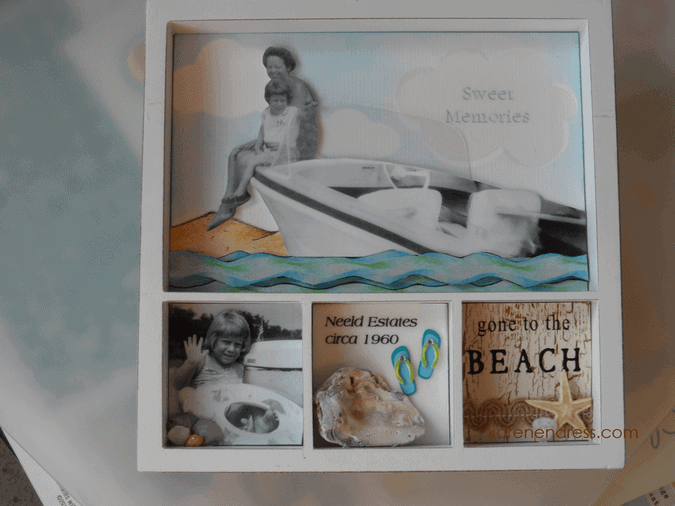 Thought some of you might be interested in this memory box I made for my mom with several photos from our family’s cottage on the Chesapeake Bay.

I had NO idea how this was going to come together, so I just started by picking a small white 7 Gypsies shadowbox (stash).  I printed three copies of each photo because I knew I would mess up and it’s a good thing, especially the boat pic.  That took many tries because I had to cut four people out of the photo to make it just my mom & me 🙂 Getting the acetate positioned for the boat windshield was no picnic either! 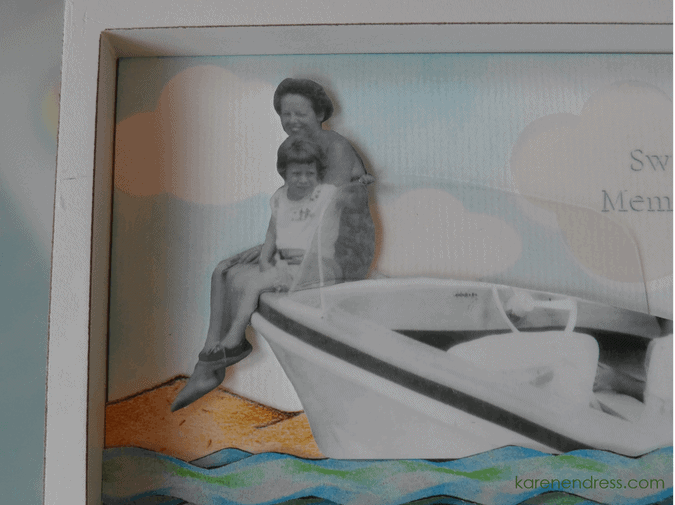 The boat needed a background, so I took a piece of textured cardstock, masked off some clouds (MFT Cloud Trio & Simon Says Stamp Talk Bubbles) and lightly sponged some Distress ink over the background.  Since the photo didn’t show the entire boat, I needed something to cover up the bottom.  Head to my ScrapRack’s “Summer” section for some inspiration!  I pulled quite a few items that didn’t make the cut, but did find a use for the sand and waves border stickers, “Gone to the Beach” embellishment, the flip flops and a small container of teeny tiny seashells I bought my daughter on a field trip long ago.  I rescued it from a give-away pile when she was cleaning out her room.  Good thing, huh? 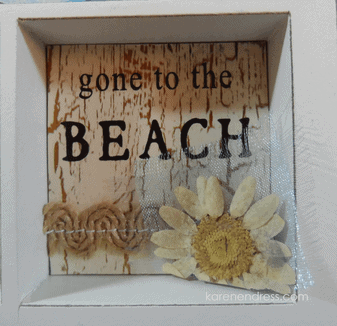 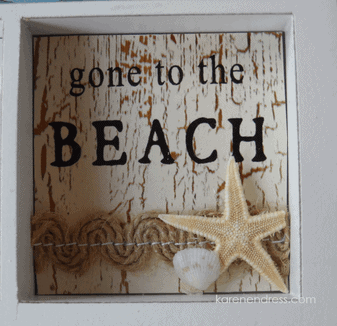 The embellishment in the right opening lost more petals every time I touched it, so I replaced the flower with a tiny starfish and shell.  The middle section has an actual shell from our beach, one of maybe 20 I’ve saved all these years.  Instead of stamping the date and place, I ran the vellum through my printer and carefully placed the adhesive under the flip flops and shell. 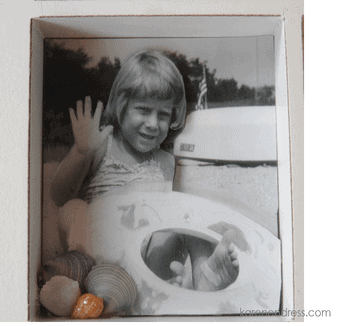 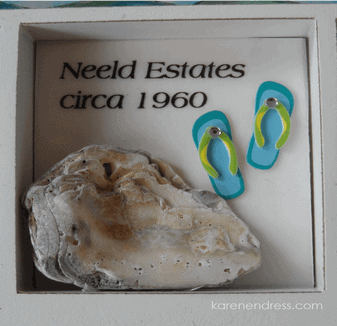 For the left-hand section I took a second copy of the photo and cut just the inner tube & feet portion to place over the full picture, using foam tape for dimension.  The larger shells are also from our beach and the tiny one is from that rescued container 🙂

The last thing I did was print out the sentiment onto vellum and die-cut one of the same clouds from it.  I placed it over but slightly offset from the masked cloud on the top right.  I did a lot of agonizing over all the details of this project, but in the end both my mom & I loved it! 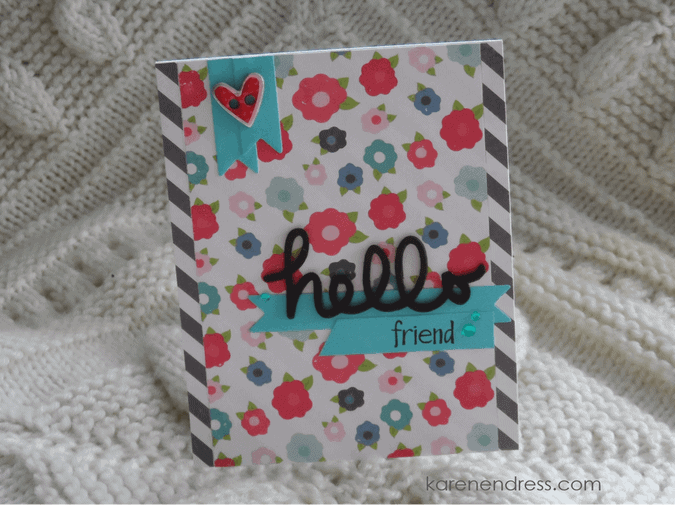 As so often happens, you can follow the progression of my card making from scrap to scrap, so here’s another look at that oh so pretty Echo Park floral paper (We Are Family by Lori Whitlock) I used recently.  It’s very similar to one of the papers in the My Mind’s Eye On Trend 2 collection by Jen Allyson (which I also have, so at least I’m consistent!). There’s just something I love about the shape of those little flowers!

This was a simple card, the part that took the longest was deciding what to use on top of the flags in the top left corner!  As usual, Neenah Solar White 80 lb. for the cardbase, layered with the EP paper.  The black & white side strips are the reverse of the floral paper.  And if those aqua flag ends look just perfectly cut…well, they are!! Because I didn’t do it!  These are from the Teresa Collins Studio Gold 7 Labels pack and they’ve come in very handy already 🙂

I used two more as a base for the sentiment.  The hello is die cut from The Crafter’s Workshop hello die from scrap black cardstock which I layered onto one cut from black craft foam to give it more dimension.  The “friend” part was stamped with The Paper Studio “Everyday Expressions” which has many useful single words. 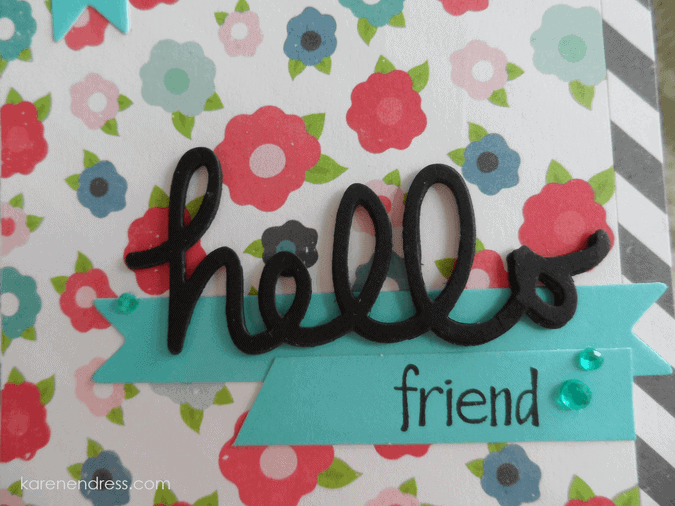 To finish off the card I finally found the perfect match for that top corner—a heart shaped “button” epoxy chipboard sticker from a really old Heidi Grace collection called “Cartwheel.” The bling is from KaiserCraft in aquamarine. Stash!! I did add one more touch (unfortunately after I photographed) which was to fill the holes in the heart with silver Stickles. 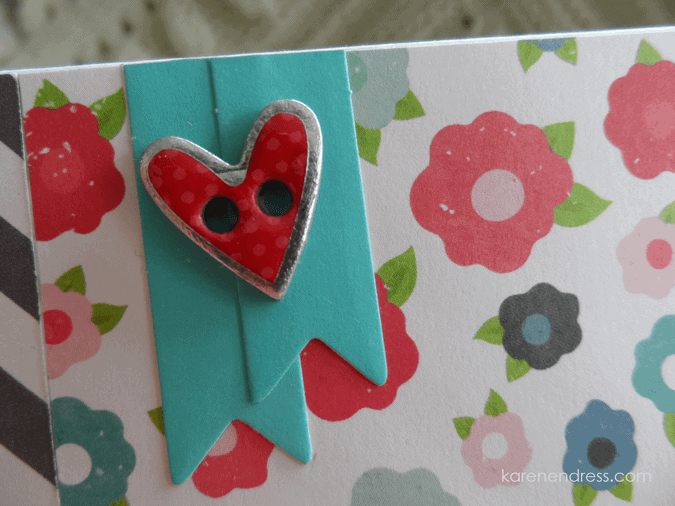 As you can see from the photo, they’re just these two gaping holes & I had no matching fibers at my temporary craft area (a.k.a. the dining room table.) I’m hoping to do a post soon on this and the fun I’ve had there with my crafty friends this month then carry it all back up to my real craft room.  My DH has been VERY understanding of the mess so far, but… 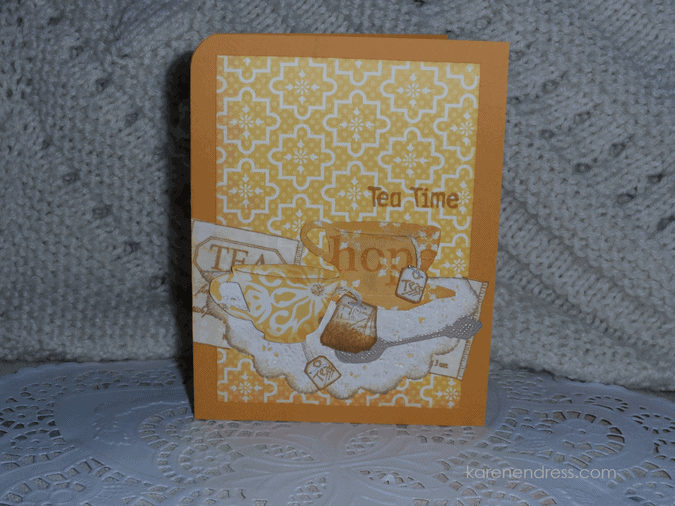 OK, so here’s what I did with those yellow scraps I had from the second housewarming card!!  This one got pretty detailed and I’m not entirely happy with how bottom heavy it turned out, but overall I think I can send it to one of my tea-loving friends and they will enjoy it 🙂

I used a mostly monochromatic color palette with a cardbase of gold Recollections cardstock layered with the DCWV Mi Casa scrap, a doily from my stash (that’s an actual doily from an actual restaurant, I told you I “collected” things!), Distress inks in Scattered Straw & Frayed Burlap, VersaFine Toffee ink and tea cups cut from two different yellow and gold patterned cardstocks.

I used the Tim Holtz/Sizzix Mini Tea Time die for these, but not recently so I can’t tell you what the papers are. I’m always anxious to try new tools and products, but don’t always have a project to use them on so that’s how a lot of those bits & pieces end up in dishes on my desk!!

The stamps I used were: TPC Studio “Coffee Cafe” (Tea Time), Peddler’s Pack (tea bag), Stampington & Co. (tea packet) and Graphic 45 (spoon, which I stamped with VersaMark ink and embossed with Ranger Liquid Platinum embossing powder).  The inside sentiment “Makes Everything Better” is from the MFT Hug in a Mug stamp set.

For the tea bag, I sponged some ink on the part that’s supposed to look like it has tea in it and used the Tim Holtz Tiny Attacher to staple the tag to some string I had lying around.  Even the Tiny Attacher staples were a little too big to look realistic for this tea bag.  Maybe drawing the staple onto the tag would have worked a little better?

I adhered the doily, tea packets and tea cups flat to the card with Tombow tape runner.  It’s hard to tell from the photo, but I scrunched the tea bag a little and used some Stampin’ Up Stampin’ Dimensionals to try to make it look like the tea bag had been taken out of the tea and squeezed.  The last thing I did was round the top left corner to try to bring at least a little something to the top part of the card! Whew! Describing cards is thirsty work! Time for a cup of tea 🙂