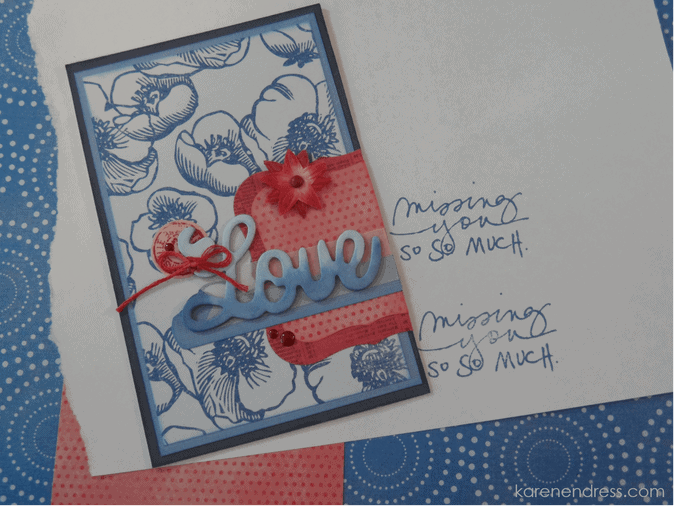 Hi, everyone!  Here’s another card origin story for you!

Often my card ideas come from seeing a sentiment, some patterned paper, an embellishment (like the previous “Believe” card), or even just a particularly pleasing color combination.  And very often, a new card will emerge from the scraps of a previous card with new elements added to round it out.

This idea came from the backdrop papers I used to photograph the last card. They looked really pretty together as they were from the same DCWV stack I used for that card.  Hmmm…my mom likes pretty cards, she’d really like that floral paper & I could use another one of those words from the Color Splash pack!!  A card idea is born 🙂

I double matted (DCWV) the blue floral to cover the entire cardbase (Neenah Solar White 80 lb.) and used the red dotted paper as an accent.  I chose a darker red for contrast (Recollections Vintage Collector) and cut both with different sizes of the Spellbinders Labels One dies, positioning them so that the word would be about 2/3 of the way down the card. This time I used Faded Jeans Distress ink to color the chipboard word instead of Zig markers and it blended much better 🙂 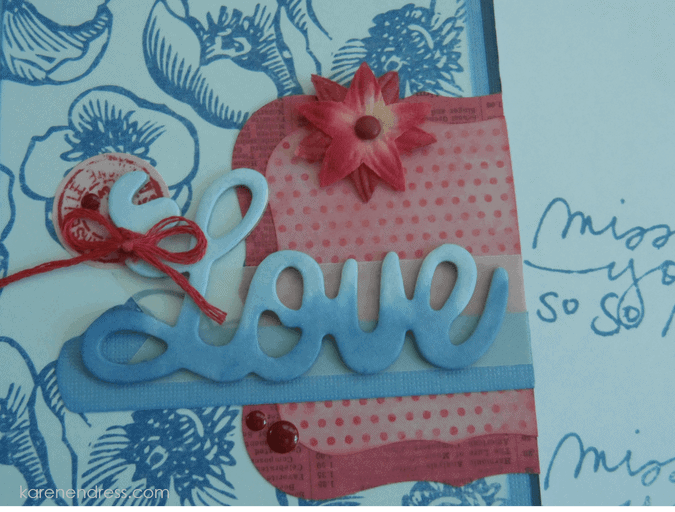 I grabbed some textured light blue & vellum scraps (from the bits & pieces dishes that are overflowing onto my desk) to layer under the ‘Love’ word for contrast. Then I went to the color section of my ScrapRack for some red embellishments. Most everything in the ScrapRack is unlabeled and as old as the hills but still quite usable! I found the flower & the postage cancellation mark there–YAY! Using my stash!! 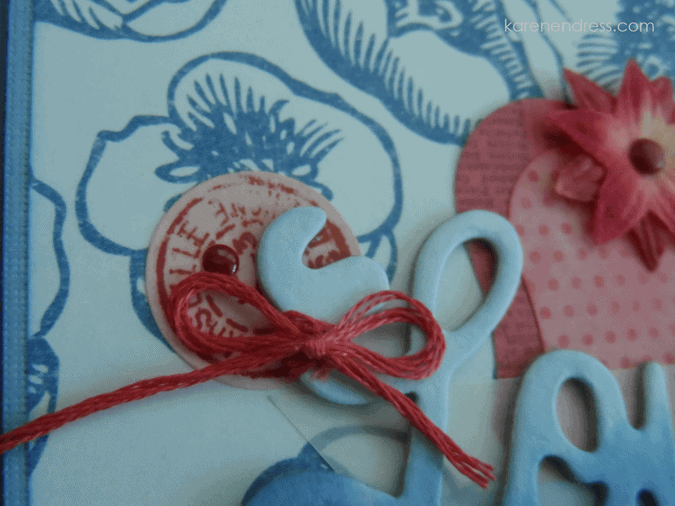 Finishing touches included some DMC floss that I wrapped around the ‘L’ and tied into a bow as well as a few coordinating enamel dots (MME Lost & Found Christmas) from my stash. Inside I stamped the Technique Tuesday Ali Edwards sentiment you can see test-stamped in the first picture. Looking back, I’m not totally pleased with the placement of that postage circle, but it is a handmade card and I’m pretty sure my 97 year old mom is not going to be critiquing her card! Have a great weekend!!