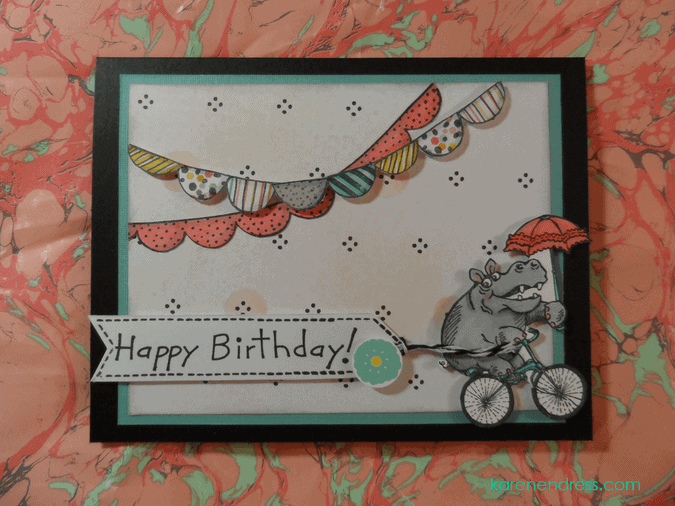 Hello, all!  As promised, here is another card post, this one using a Stampendous stamp I think I have used only once before since I bought it.  I don’t regret the purchase, though, as 1) I didn’t pay full price for it and 2) it makes me laugh every time I look at it.  I’m hoping it made the friend I sent it to laugh, too!

I tried looking up the Hippo Cycle and the Stampin’ Up Banner Boutique stamp set I dug out for this card and, sadly, both are retired. The sentiment stamp came from this Inkadinkado Humorous Birthday set and the dashed line around sentiment is part of the Avery Elle Sending You set.

I used a black cardbase (Recollections) layered with an aqua linen textured panel (DCWV mat stack) layered with a piece of pretty patterned paper.  This had been lying on my scrap pile for a long time, so I don’t remember where the full sheet came from 🙁 The hippo is colored on Copic-friendly paper I got back when I took a beginner’s Copic class at one of our local scrapbook stores, but is similar to this sold by Ellen Hutson. The banner she is pulling is a scrap of some cheaper white cardstock. 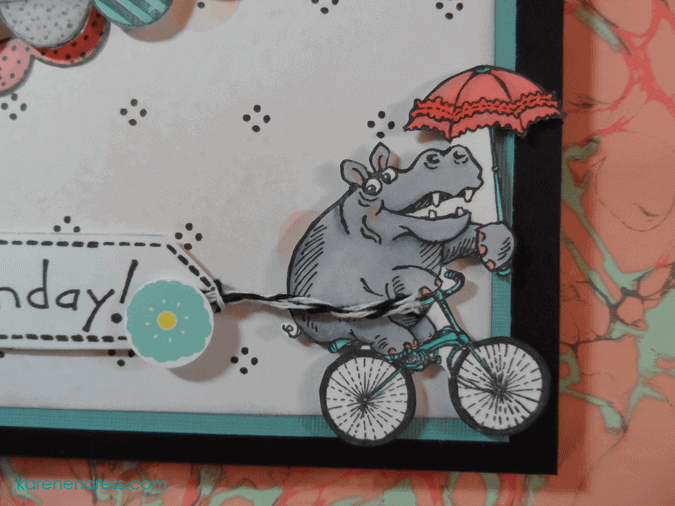 For the other banners, I colored the bottom one with my Copics (I got a really nice set for Christmas one year from my DH 🙂 and actually paper-pieced the other, a technique I hardly ever take the time to do.  I like the effect here as I found some scraps of American Crafts paper on my pile that matched very well with the color scheme of the card. 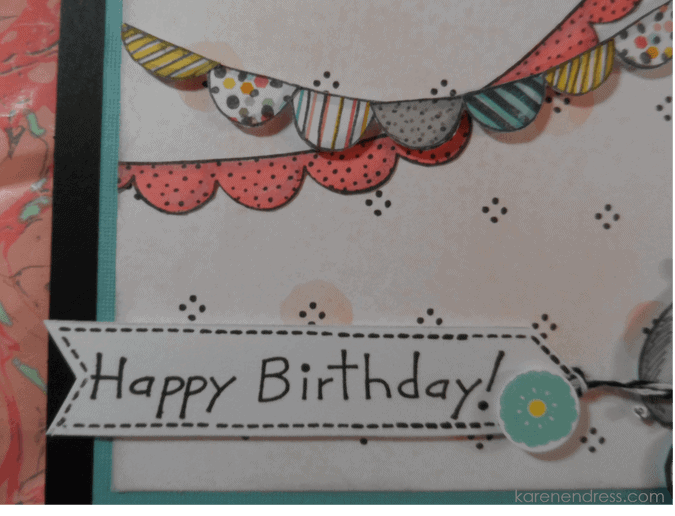 When I assembled all the parts I adhered the colored banner directly to the card but added Scotch foam tape to the second banner and the hippo & her banner. I tied the hippo banner on with some Baker’s twine (Recollections) and the little flower I circle punched from some floral paper to cover up the spot where I messed up the dashed line stamping 🙂 Thankfully no actual card surgery was required for this particular card and no actual hippos were harmed during the making 🙂 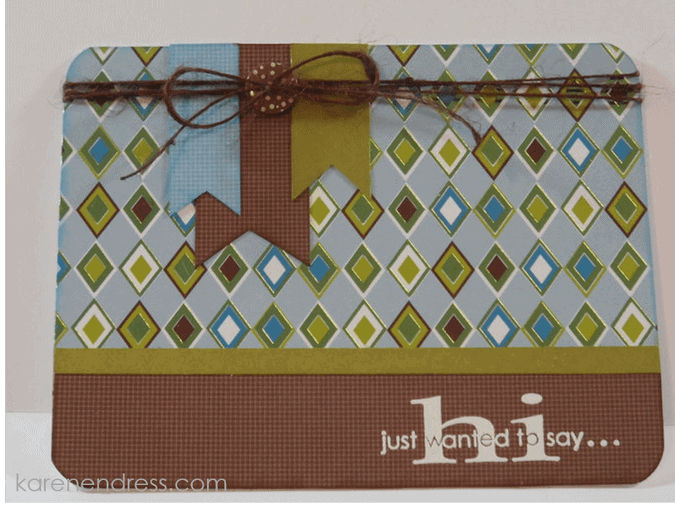 The starting point for this card was the intent to use some of my stash paper.  I browsed till I found this gorgeous foiled paper from the 2012 DCWV “White Ginger” stack. (I did mention I was a paper hoarder—I have even older paper than that!)

I layered the foil with a brown paper with a tiny check pattern from the same stack and added a strip of pearlescent green cardstock.  It came from a mat stack, but I can’t say which one as I got so tired of looking through ten or twelve mat stacks for the exact  color I needed that I just tore all the papers out and put them in color order in a mesh bin.  It took a long time, but was totally worth it!  I do know they were all DCWV mat stacks, though 🙂

The sentiment is the Penny Black “to say hi” stamped in Versamark ink and embossed with WOW white embossing powder. 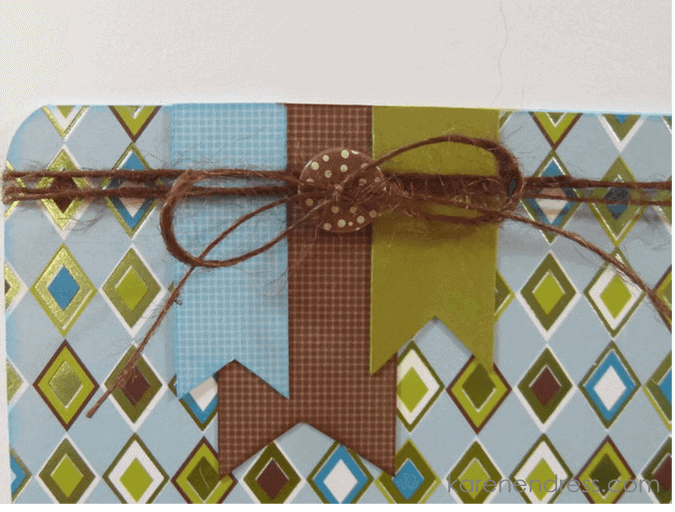 For this cluster on the top left I cut some strips from the brown check and green cardstock as well as an additional pattern from the White Ginger stack, cut flag ends, inked the edges with Colorbox pigment  ink stacks, probably Rain Forest and Surf’s Up.  These stacks are my “go to” for inking edges because they are small, easy to handle, and with just three or four carefully chosen stacks you have almost any color you could possibly need. Of course I may have a few more than four, but they have served me well over the years!

To finish off the card I wrapped it several times with some very hairy 🙁 twine salvaged from a package, tied (with great difficulty) a bow and glue dotted the bow & button (source unknown) to the card.  It kind of looks like it’s threaded through the button, but believe me with that twine I would not even have attempted it!  Anyway, I usually do just cheat and pretend I threaded the button 🙂 Does that make me a bad person?  Let me know if there are any kindred spirits out there who can’t be bothered trying to thread twine through buttons!! Happy crafting!  Karen